Are you wondering what possibly could result in you having monsters that kill your productivity? Check out the 3 Notorious Productivity Killers and learn how to fight them easily.

3 Notorious Productivity Killers and How to Fight Them

Let me take your mind back to the days when I was a kid. I never talked about this, so it’s time I let it out.

As a kid, I had one monster which hunted me till the time I entered high school!

If you watched the movie as a kid then you will understand why I saw Velvet Von Ragner (Gene Simmons by real name) who played the role of an evil hermaphrodite as my monster.

His costume was so scary that I developed a magnetic memory of his look which hunted me each time I was alone.

My worst days were when I was locked up in my room to sleep at night! I always imagined that Velvet Von Ragner was in the room with me and so would run to my mom to sleep in her room.

This monster lived in me for a long until one day, I took the decision that I was going to sleep alone!

After that day, I got that monster fired from my head, and until my high school days, I never feared sleeping alone or being alone in the dark.

Well, that little story is my recipe for the post I have for you today!

Do you believe that as a blogger, you might have monsters chasing you all about the blogosphere?

While I wait for your answer in a comment, my opinion is that we all have our monsters. Or should I say we all have one or two productivity killers that mess up with our heads?

The One Monster That Begets Other Productivity Killers

In case I have taken your mind far away from where it’s meant to be, permit me to bring it back by telling you that the monster I mean is that state of mind that sets in each time you flip open your laptop or hop on your desktop to start blogging!

Yea, that’s the monster I believe every blogger has, the “mindset“

But the mindset is not just enough to help me drive home the point I want to make in this post, which is why I decided to break it down into three:

In fact, it will be wise if I say:

We are the architect of our own monsters!

In case, you have not considered this, let me show you how these 3 monsters have been killing the real blogger in you.

Starting from when you first came online till now, can you recall how many times you have doubted yourself on what you can do as a blogger?

Can you recall those moments when you start writing a blog post and at a point, you pause to ask yourself if really you are making any sense?

Can you remember those days when your two hands shake while replying to comments made on your post, especially the thought-provoking posts?

Can you remember a time when you feel your blog isn’t fit to be called the name you primarily gave it?

I can go on with so many scenarios where you have doubted yourself as a blogger and as a result, allow the monster to take the lead in your blogging career.

PROCRASTINATION is another productivity killer/monster.

Look at it this way, having doubt about the things you do as a blogger gives birth to procrastination.

If you can agree with me, there have been countless times you have procrastinated in so many ways without doing anything or carrying out an action.

We can look at them right away…

Have you ever said you will write a certain blog post say on Monday and finally fail to do so?

How many times have you made New Year’s Resolutions and kept to them?

I figured out I had a monster called procrastination to deal with, so the best thing for me to do was to do more CTA (call to action) than more talking.

Early this year, I read a couple of blogs where the authors listed about 5 to 10 things they will be doing on their blogs before the end of December 2019, and my thought was that half of what they said will not be achieved if they have the monster “procrastination” messing with their heads!

Finally, let’s see the last monster that torments most bloggers. But before that, If I may ask you, what is the greatest fear you have as a human?

I believe it’s fear of failing in whatever you do! Isn’t that true?

One thing I have come to discover in life is that nobody wants to fail or be associated with failure. So for sure FAILURE is one hell of a monster most bloggers have.

Your monster may be fear failing your readers with your content.

Fear of saying the wrong thing when replying to comments on your blog, especially the posts that are thought-provoking.

Fear of receiving negative feedback from clients or your readers which leaves you with the impression you are a failure.

Fear of being perceived as a non-authority in your niche.

There are so many things that can result in your blogging failure and these things are the monsters that chase you about.

However, failure only becomes a tormenting monster when you allow it to be. You allow failure to be a monster when after learning from your mistakes you are still stuck in your comfort zone hoping for things to turn around magically.

Now I am sure you don’t want any of this because ordinarily, you always want to be a party to success and not a failure!

3 Notorious Productivity Killers That Messes Up Your Head

Just admit to yourself that as a blogger whether a newbie or pro that it’s normal to have doubt because you are a human.

However, while admitting to doubt, try to tell yourself the truth that even in your doubt you will go ahead and do what you feel is right and see how it plays out.

Do you have a topic you feel will gain the attention of clients or readers? Go ahead and write it to the best of your knowledge and you will see what result you will get. Never ever set your hands off your keyboard anytime doubt sets in, believe in yourself, and keep the blogging spirit moving.

The one word I use to overcome this monster is “passion!”

Passion is the catalyst that helps you push forward anytime laziness sets in.

In most cases, I have had challenges keeping to my blog post schedule, replying to comments when due, visiting blogs I follow in my niche, and even updating some plugins that needed updates.

I have had cases when I postpone doing some of these things, but one thing that kept me doing the needful was my passion for blogging.

So in other to defeat the monster of procrastination, you need to pick strength from the passion you have for blogging, writing, or marketing.

Do you know it is good at failing as a blogger?

I happen to be one guy who believes so much in the school of thought that says:

Failure is an option in life!

Surprise to hear that?

Yes, that’s the simple truth you must admit today if you really want to defeat the monster FAILURE in your blogging career.

To tell you the truth, no one has ever made it in life without failing.

Failure is the recipe that prepares you for the bigger picture in whatever thing you do.

If you’re not learning something about blogging each day, you’re not growing as a blogger.

My ultimate advice in defeating failure as a blogger will be to stop making failure a negative thing and start blogging.

It’s normal to fail or make mistakes, just don’t blame or kill yourself. When you messed up doing one thing, don’t give up on it, give it more willpower and you will be surprised how things will play out.

All you need is a driving force to keep blogging!

Check out this infographic to learn what you need to do to put these notorious killers behind bars for good:

Infographic brought to you by Wrike

That’s all about the 3 Notorious Productivity Killers.

I will be taking my hands off my keyboard now so you too can contribute to this discussion. So I have just one question for you.

Apart from these monsters – doubt, procrastination, and failure, what other monsters do you think torments bloggers?

I would really love to hear from you and also do your friends the favor of sharing this post on social media!

Let’s get the discussion started… 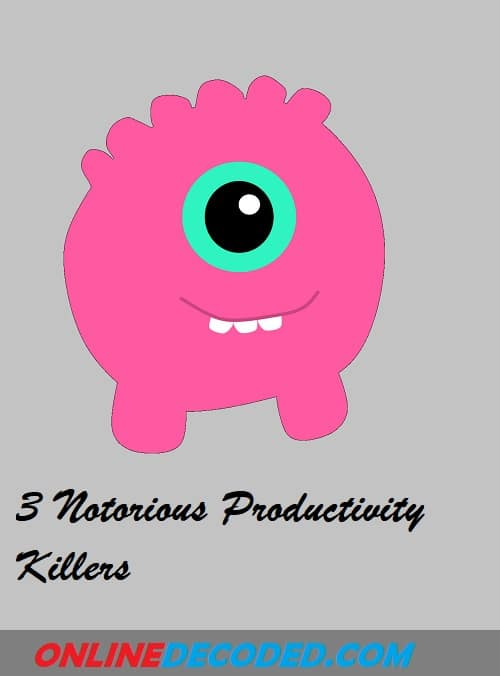 15 Best Sites To Download Movies For Free in 2023
15 Best WordPress Plugins To Supercharge Your Blog In 2023
Grammarly Review 2023: Is It The Best Grammar Checker?
DesignEvo Review 2023: Create the Best Logo for Free Easily
7 Best Domain Registrar Companies in 2023